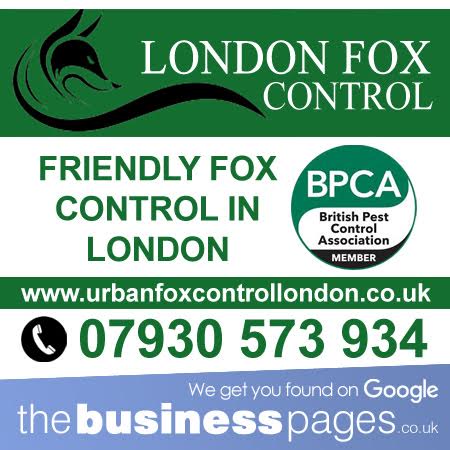 As the population of London and surrounding towns continues to increase, we find ourselves faced with more human/wildlife conflict; especially from urban foxes that have now adapted themselves into living in such close proximity with us. This tolerance is instilled into urban fox cubs from a very early age which may explain why they can get very, bold, tame and display no fear of humans.

Human interaction with urban foxes should not on any level be encouraged. This is often the root cause of unwanted and persistent urban fox activity.
Although often pleasant to watch; we must not forget that urban foxes are naturally wild predators, very unpredictable and have a serious potential to inflict injury and harm.
Due to the fact that urban foxes live in close proximity with each other disease is easily spread amongst each other such as sarcopic mange, parasitic worms, fleas, ticks, leptospirosis (Weils’ disease) some of which could potentially be passed onto humans, pets or livestock.

Being at the end of a food web means that they will eat absolutely anything put in front of them; even other foxes.

We take animal welfare and disease management responsibilities very seriously in order to comply with various pieces of UK Law and Legislation.
Pest – Go Limited do not relocate and release foxes as this may contravene Section 4 of The Animal Welfare Act 2006 (Unnecessary Suffering).
We do not recommend repellents as they do not pose any physical threat to urban foxes. Urban foxes quickly learn that they are just another sound, smell or light in their urban environment.

You must be logged in to inquire about this ad.

Other items listed by admin